This is the third blog about our second dental outreach trip to Jamaica.  Here’s the first blog, wherein I mainly talked about preparing to go down and how much better we were at it (compared to 2015!).  Here’s the second blog, wherein I talked about clinical set up, equipment failures, and how we adapted to make the best of the situation.  Now, in this blog, I’m going to be sharing only a LITTLE bit of the some of the fun we had at the clinics and back at the resort.   In the next blog, I’ll talk about some of the shock and awe that we saw at the clinics.  And in the final blog, I’ll discuss reverse culture shock.

Having Fun… Perhaps Too Much Fun!

I can’t divulge everything; you’ll just have to come down to experience the fun yourself.  I do recall Dr. Mille Calko saying it was the funniest 10 days of her life and that she’s never laughed so hard!

I don’t think there was a day when I went to bed before 1:00 a.m.  And yet everyday I was up around 6:30 a.m., ready to get started on the day.  I think I can speak for all of us: we were running on adrenaline every day.  Some of us got sick after a few days because our bodies were tired and we were just pushing them to the extreme.  I mean… think about it… during clinical days, we would get back to the resort around 5:00 p.m. and then go to the bar, grab a patty, hit the ocean, then go have dinner, and then hit the club, etc.  Do that for a few days and you’ll understand why some of us were getting sick.  We ended up loading up on soup and antibiotics to get us through the week.  But it worked!  Some of the volunteers got home and, when they finally gave their bodies a chance to recover from the adrenaline rush, their bodies turned against them and got them sick for a few days! 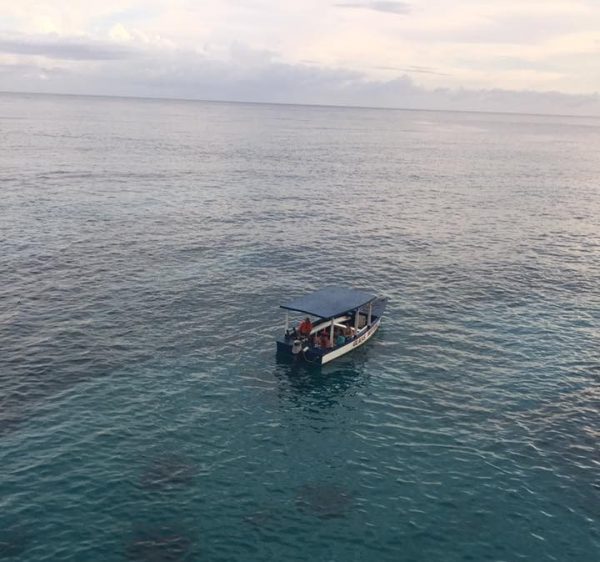 Here’s the tiny boat team Grange Hill (plus Dr. Jackie Geroche) took to Rick’s Cafe one evening.  What a ride! 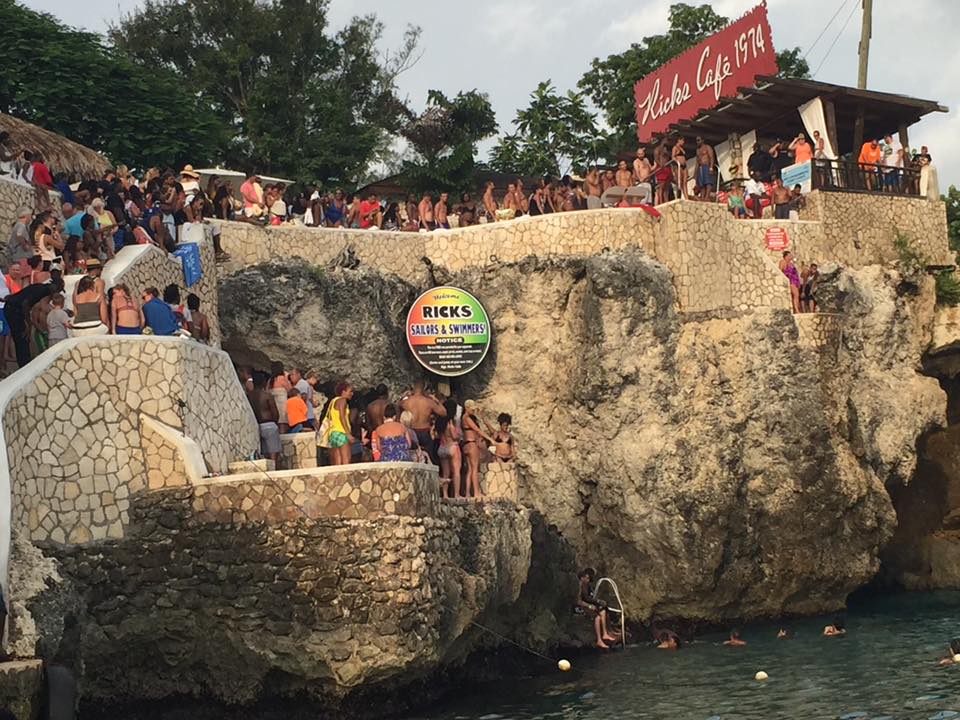 And I don’t want you to think that there was a clear separation between work and play.  We played on the way to and from the clinics.  We also played at the clinics.  For example, at Grange Hill, we played music on the van ride, played music at our clinic, and sometimes we took photos and posed with patients after a treatment.   Our group theme song was…. Ghostbusters!  Why?  Because that’s what my son Michael currently loves as his favourite song.  So I just kept playing it and we kept signing it.

Over at Little London, they were singing Christmas Carols like Let it Snow and Jingle Bells.  Sometimes, while waiting for a patient, Dr. Irish Malapitan and Jazz Chohan would start doing ‘booty bounce’ dances at the clinic.  All of these things made patients laugh and feel more comfortable.  Here’s what it looked like 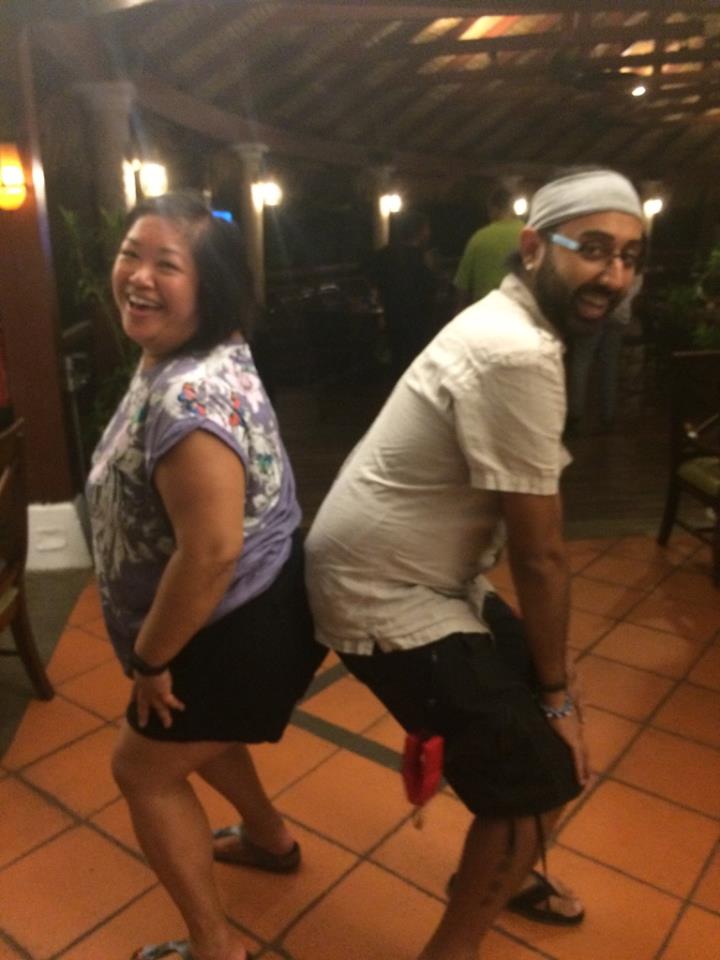 The official slogan for team Little London was Bar – Patty – Ocean.  Here’s how it came about, as per Dr. Irish Malapitan:  “We were on the bus; we were figuring out what we were going to do next.  Oh no let’s go to the bar. No let’s go to the ocean.  It was a time we could as a clinic group, think about the day and trouble shoot about how we were going to get better.  By Friday we had it down to a science.”

We had fun, regardless of where we were of what we were doing.  Back at the resort, we would do things together like play “Apples to Apples” at Cafe de Paris; go for a stroll by the beach late at night; hit the water park and go down the slides; hop on a boat and head out to Rick’s Cafe to jump 60 feet into the water (for the record, only Dr. Joseph Fava did this!).

I think we were having too much fun.  But that’s what made it work.  That’s what kept us motivated.  To get through the hot days, poor ergonomic conditions, lack of  available instruments and equipment failures.

We had a group of characters who would tell us incredible stories (like Dr. Mary Berkmortel or Dr. Jacqueline Geroche); we had funny nicknames for lots of people (like Candlestick for Stefan Atalick and Dr. Propa Touch for Utech dental grad student Tevin Carter).  Sufficed to say, there was a lot of love in the air.  And it all started from the beginning of the trip.

Some of the Nicknames

So apparently, “Irish” means potato in Patois.  And that’s why a patient thanked “Dr. Potato” when referring to Dr. Irish Malapitan.  Papa Joe explained at breakfast early in the week that Jamaicans referred to rustic potatoes as Irish and from that day it just stuck. 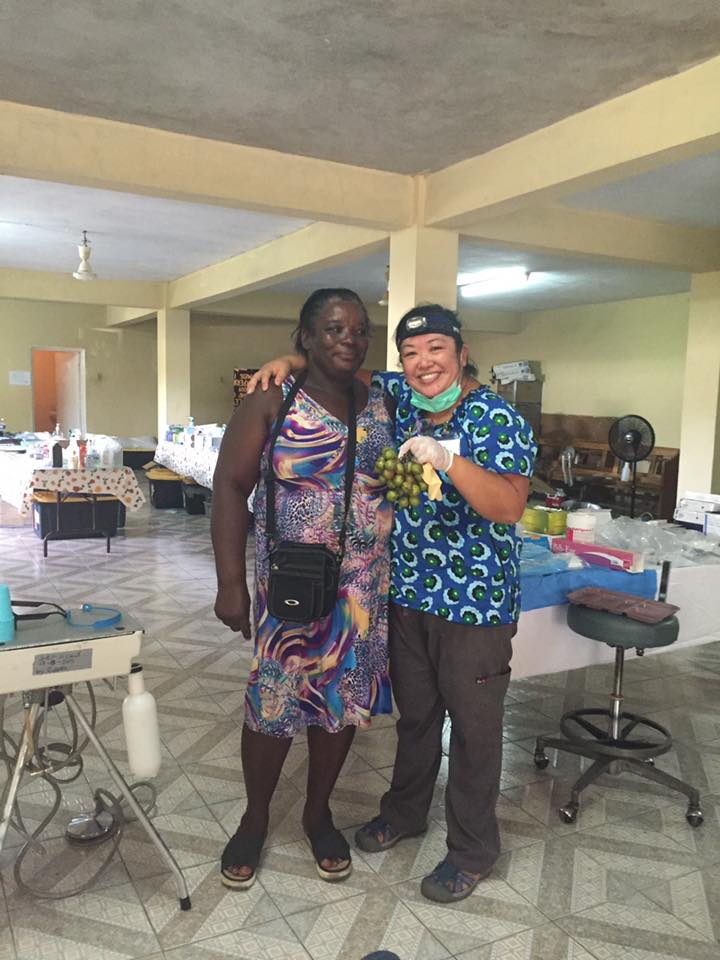 This name was given by Dr. Irish Malapitan to Jason Brown (Henry Schein sales manager).  Basically, when team Little London was deciding on who was going to assist who, Dr. Irish said that she would take Jason Brown (a completely inexperienced assistant).  “He’s my man child” said Dr. Irish.

According to Jason: “Dr. Irish and I clicked from the onset. Over the five days, I learned how she worked and what she needed.  By the end of the week, we were able to practice four-handed dentistry.  Doctor Irish was very patient and I have a lot of respect for her.” 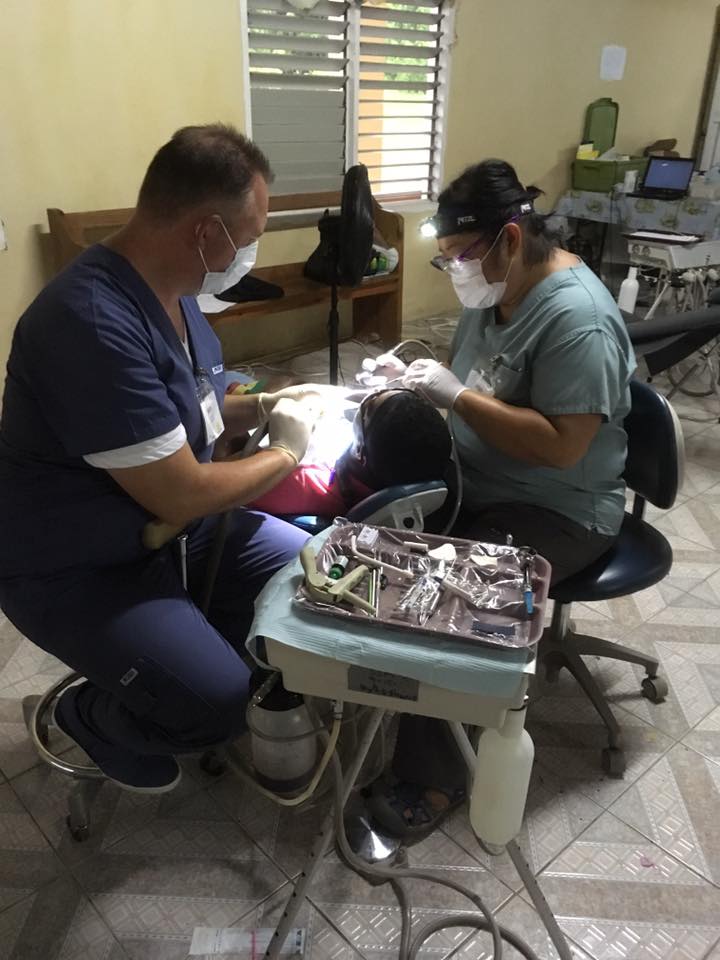 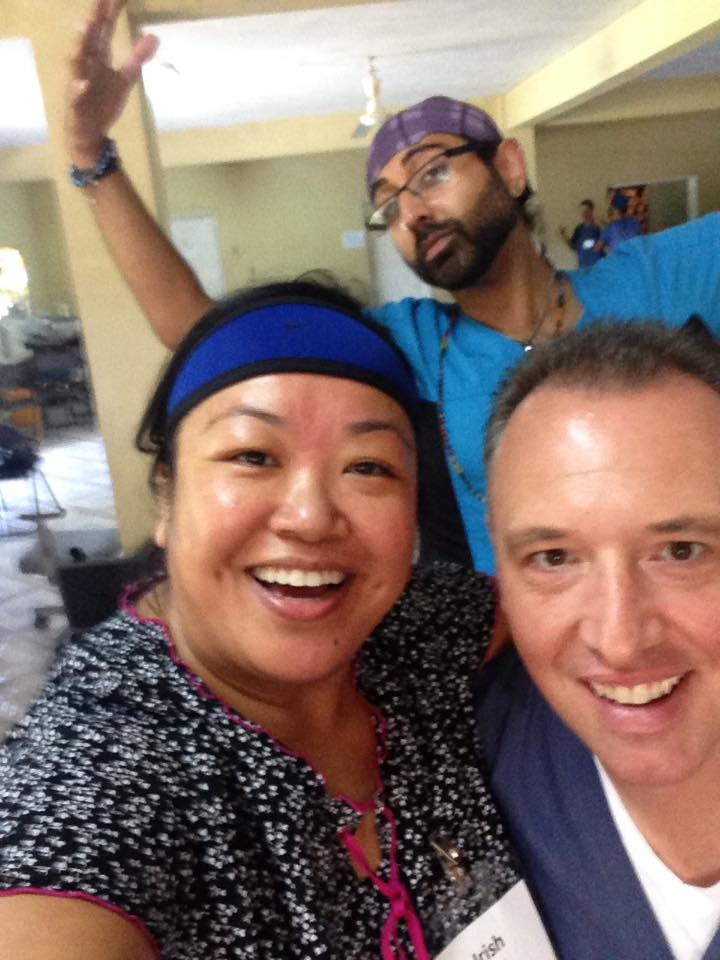 Dr. Potato (Dr. Irish Malapitan) with her Man Child (Jason Brown) and dental hygienist Jazz Chohan in the back

So on the first day of clinic, I was going around and asking everyone how they were doing; whether they needed anything; how much time they thought they had left before I could bring them another patient.  When I was talking to UTech Dental Grad Tevin Carter (which DMC LLP sponsored to be there), I asked him if that was going to be a difficult extraction.  His response: “No.  It just needs the propa touch”.  And it was like a light shining over me: he would be called “Dr. Propa Touch”.  I would henceforth introduce him as Tevin, aka “Dr. Propa Touch”.  Everyone laughed. 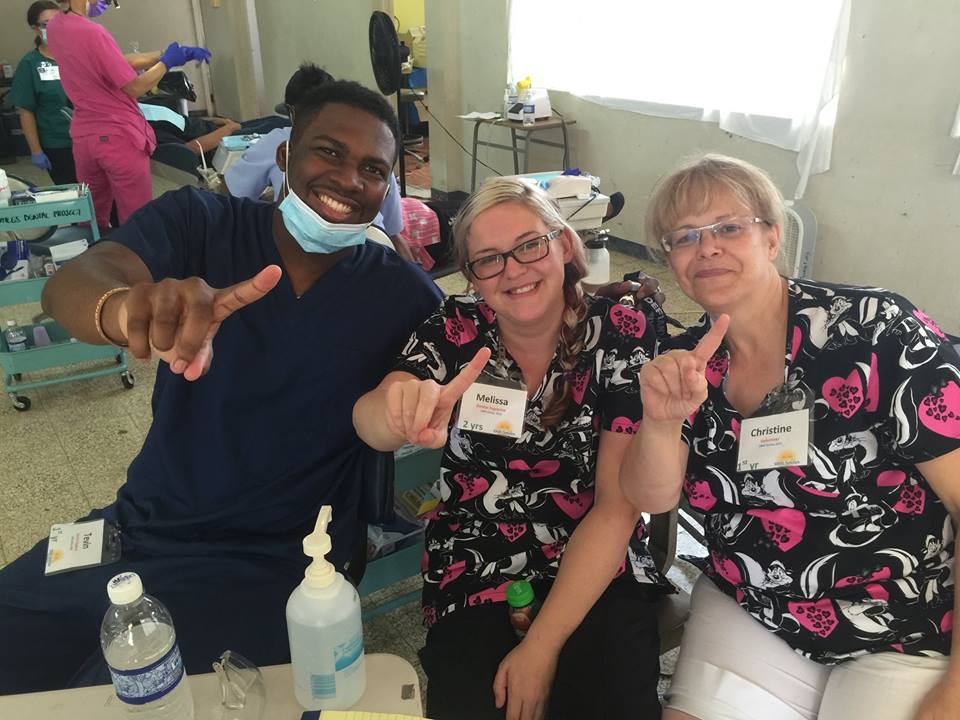 I’m sure the name will stick because… during our 2015 mission trip, when we were volunteering, we had a UTech dental grad student named Grantley Grant.  I saw him spend over an hour with a difficult extraction.  The cap had snapped and he was left with a bunch of roots. He asked me to bring him some instruments – east / west elevator, etc.  I had no idea what he was looking for.  I eventually brought him the right tools, which I called ‘a scooper’.  And when “Dr. Scoops” (who was sweating it out trying to scoop out those roots using his trusted scooper) finally finished, everyone was overjoyed!  “Dr. Scoops” or “Scoops” for short stuck with Grantley.  Apparently, in St. Lucia in July 2016, Grantley was there.  And he was still known as “Dr. Scoops”.  Ha ha ha!  Love it!

P.S. Can you feel the love? 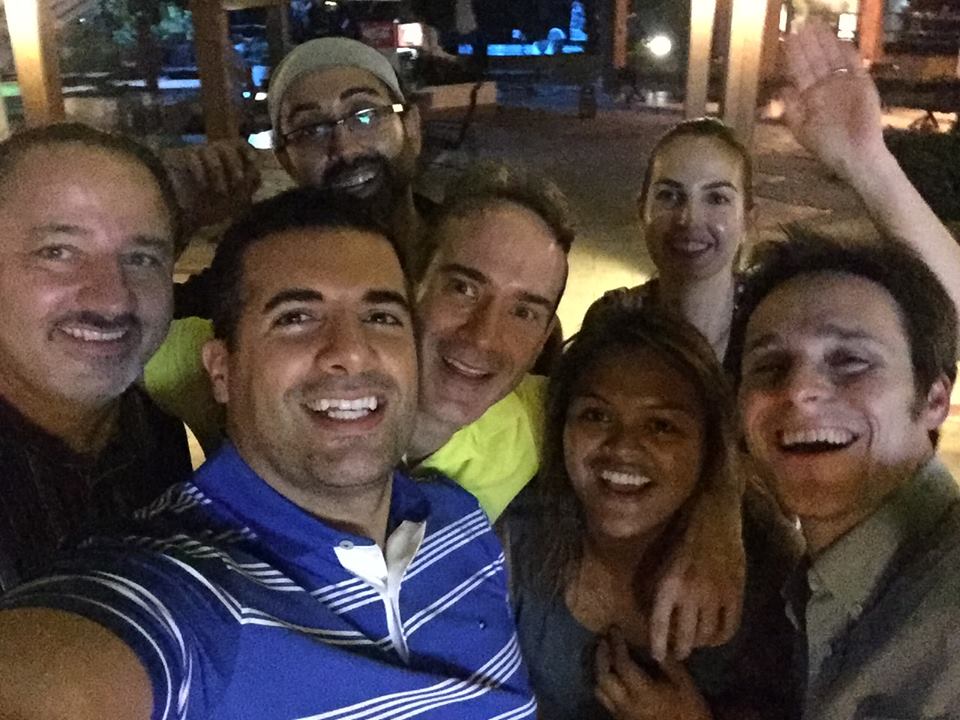 Volunteers + Papa Joe going for a stroll at night at the resort. 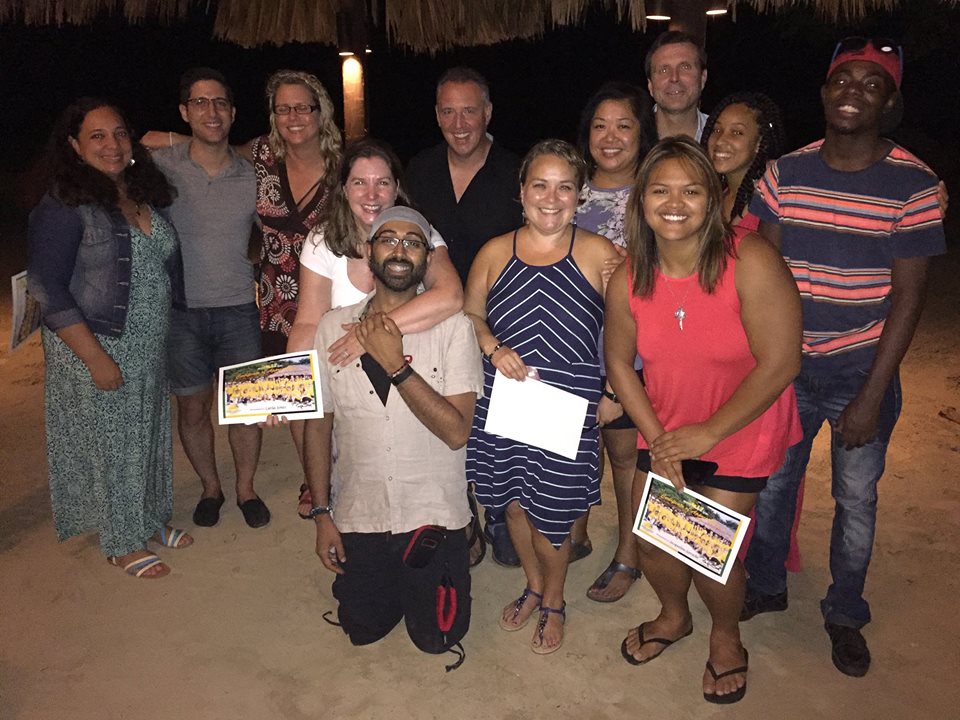 Team Little London on the last day back at the resort. 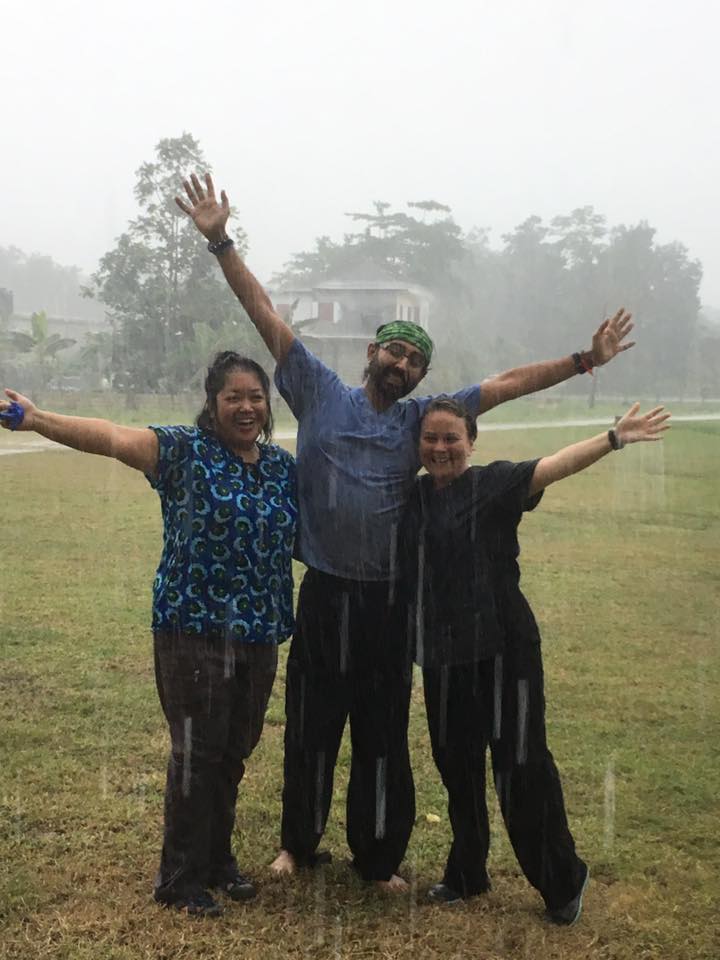 Dr. Irish Malapitan, dental hygienist Jazz Chohan and dental hygiene student (Oregon) Sandra Busch out for a stroll in the rain after clinic.