For those who don’t know, I drive an electric car called a Tesla Model S.  It was a relatively easy decision to get one.  Dr. Hans Viergever had introduced me to the company and the car and it was love at first sight!  The price of the CAD to USD was pretty good.  It could travel pretty far on a charge (~450 km).  It was super fast (0-100 in 4 seconds or so).  And it had a lot of cool technology (like autopilot).  My family and friends watched me get this strange type of car and asked: “Will the novelty eventually wear off?”  Well, honestly, it’s been almost 9 months and 20,000 km later and the answer is “Not Yet”.  There’s something about 400+ horsepower that makes you forget about all your problems.  It’s that extra trunk and frunk space.  It’s never paying for gas again (and paying about $1-$2 / night to have a full tank the next day). It’s the free supercharging.  It’s all the new updates that come out every few months (like autopilot, summons, auto park, etc.).  The car that I bought is worth more today than when I bought it (partially because the Canadian dollar tanked).

So, with these things in mind, I told my wife Paris: it’s time to trade in the Honda… but not just yet.  We’re going to get you a smaller, more affordable version of what I have: the Tesla Model 3.  Before March 31, no one had seen it.  We hoped it would be as fast and cool as the Model S.  And, as it turns out, it was.   Fans of Tesla the company and their founder, Elon Musk, hung out in front of Tesla stores ready to put their $1,000 deposit on a car they’d never seen and which they only knew a few key facts about – it would go ~300 km on a charge, it was smaller than the Model S, and it would start at USD$35,000 before government tax credits and incentives.

Then Elon Musk introduced it to us… and deposits reached over 325,000 in a matter of days: 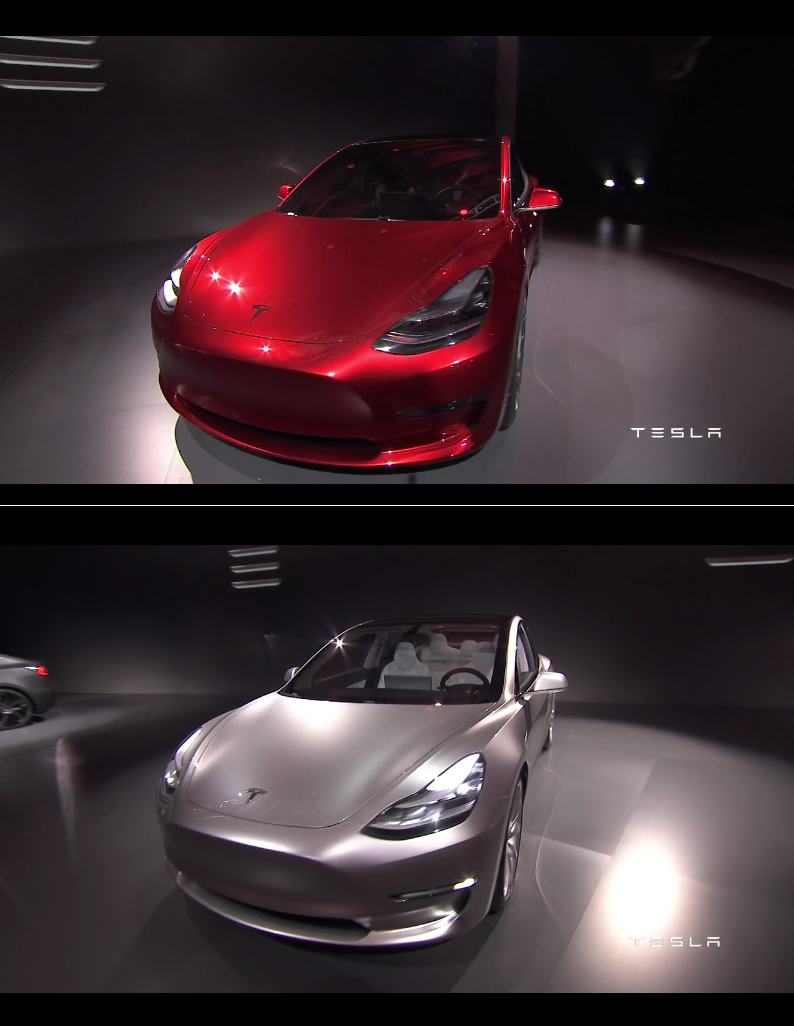 And so I went online while the car was being revealed for the first time (actually before I saw the car, I did this) and plucked down $1,000 fully refundable and hard earned dollars so that my wife and I could be one of the first to get a model 3 by the end of 2017 (but likely 2018).  Note: previous Tesla owners get priority… sorry people who didn’t get a Model S or X, but you’ll need to wait a little longer.  There was so much excitement about this car.  And thankfully the buzz / hype was warranted.  My children will never sit in a gas guzzling, slow moving, environment killing car again.  They will only ride and know Teslas.  I’m a proud supporter and I would encourage you, if you haven’t done so already, to change the automobile industry for good and put a $1,000 deposit on a Model 3.  It’s totally worth it and you won’t regret it. The funny thing is that all the Tesla naysayers (from 2012-2015; of which there have been many – including my law partner David Mayzel), they’re now watching a revolution unfold and want in!  That’s right, some of my best friends who didn’t like the interior of the Tesla Model S or the doors of the Model X are now plunking down $1,000 to get a Model 3.  I find it hilarious.  But I digress…